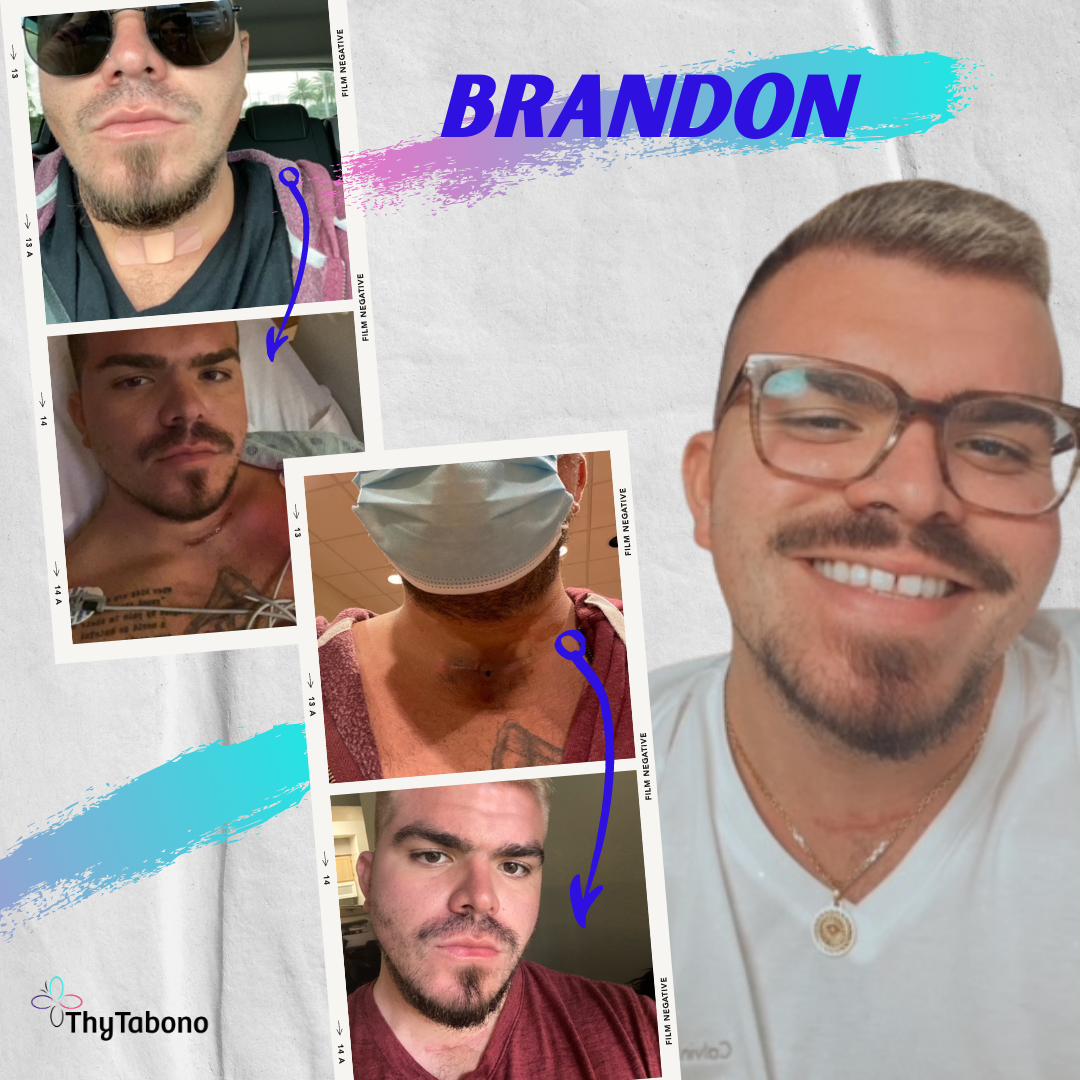 Hello everyone! I have been wanting to share my story for quite a while now, just haven’t had a chance to type the whole thing out so here I go:

Last year, in July I was diagnosed with Papillary thyroid cancer. At the age of 25, and being a male (research shows it is not as common and much more aggressive in men) so I felt a range of emotions and couldn’t believe I had the “C” word.

It was actually found by accident due to a back muscle pain and I got a CT scan done which then found the nodules on my thyroid. I got a biopsy and found out they were cancerous.

My mother’s side has a history of thyroid issues and my mother has nodules, but hers are benign.

My surgery was scheduled for 9/11/20 at a private hospital in Naples, FL and I had an incredible surgeon and team at the hospital. They told me I would take one week off work and on my second week, I could begin light work (this was not true).

After my surgery, I felt great and was excited to officially be “done” with that chapter so I started to FaceTime and make phone calls and around midnight, my voice changed and was very high pitched. I was worried, but I also had done research and knew that it was a common thing to lose your voice post surgery especially since I overused it. (My voice returned maybe after 5-7 days).

24 hours after surgery, my neck was very swollen and stiff, I looked like a toad for about a week.

I was on hydrocodone mixed with acetaminophen and drinking plenty of fluids+soup for a week. After my first week, the hydrocodone didn’t really help anymore.

My endocrinologist prescribed me levothyroxine at first and I now take synthroid (she recommended since it’s a name brand.)

About 10 days after my surgery, I started to develop a ball shape around my incision what seemed like a buildup of blood. I thought it would go away on its own, but it did not. One night my incision opened and would not stop bleeding so I rushed to the ER and the doctor squeezed out as much blood as he could and then stitched it closed.

I then had a follow up with my surgeon who removed my stitch and used what looked like an oral syringe to drain out the blood from my incision and immediately my ball went down and my incision/scar looked great!

She said it was not a hematoma, but something similar which I can’t remember the name. Just a buildup of blood that had nowhere to go, but once she drained that blood, my incision healed incredibly.

AFTER that, they reviewed my surgery report and they told me since my thyroid had three spots of cancer and suspicious papillary tissue in my neck, they wanted to move forward with radioactive iodine therapy.

I spoke with the nuclear medicine department and prepared myself for the radioactive iodine. I was prescribed a medium dosage of about 130~ mCI. I had to self isolate for about 5 days and I had no side effects/symptoms while on the radiation which was a blessing.

Two weeks later, I had my body scan check to see if any other parts of my body were illuminated with the cancer cells and luckily, I was cleared.

I am told in a year I must come back for another checkup.

In December, I had my three month follow up with my surgeon and all looks great! My endocrinologist and I have been increasing my dosage overtime of Synthroid and I think I have finally found the right dosage for me after this long! But be patient and I honestly haven’t felt much different other than possibly having more energy post thyroidectomy.

What was most insane was that my cousin in Miami who is 32 years old (female) got the same diagnosis and had surgery in October, just a month after mine. So unfortunately yet fortunately, I had someone to go through this with and we are now better than ever.

I am feeling good and happy to be done with that chapter of my life and I want to give hope to others. This only made us stronger!!

Thank you Brandon for sharing you journey and bravery with us! An open incision is what most of us would imagine to be a worst nightmare and yet, you persevered! You can follow Brandon on instagram @brandonmfperez

One thought on “Survivor Spotlight: Brandon”