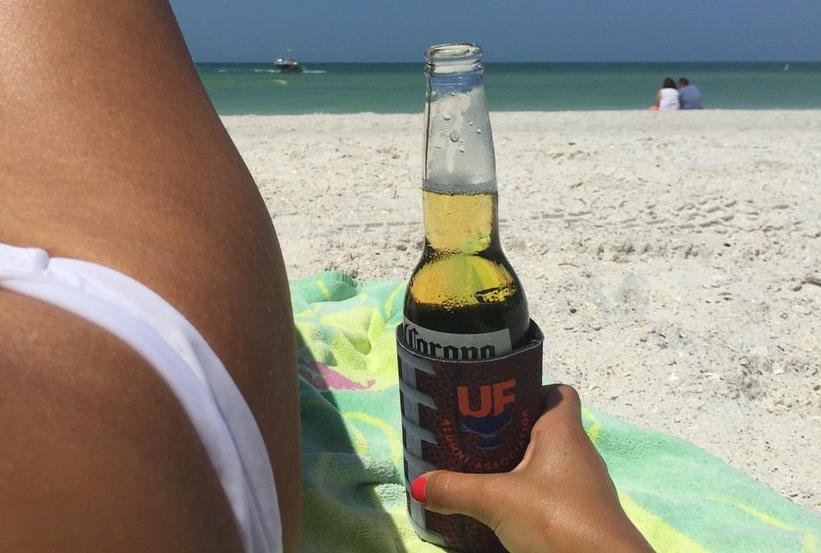 I remember my post-op appointment like it was yesterday… the surgical tape was going to come off my neck and I would finally see the new me! I remember Dr. Bimston asking me “Are you ready?” I thought to myself, either way this thing is coming off today. When he pulled the surgical tape off, it felt like a breath of fresh air. “It looks great” he said. My mom agreed and started talking about how much better it looked compared to her scar. I, of course, interrupted and said “Um … can I see it?” Dr. Bimston laughed and pulled out his cell phone, turning on the front-facing camera so I could see. You would think he would have a mirror handy, because I couldn’t possibly had been the first person excited to see the post-surgical scar. I looked into the pixilated camera on the phone, and there was my tiny little scar. The scar that at the time I believed defined me. Dr. Bimston and I then discussed treatment and care, and not too long after I was on my way.

As the first and second weeks had gone by, I was slowly but surely getting stronger and feeling like myself again. Yet, this one-and-a-half-inch incision still had so much psychological power over me. I wore scarves and turtleneck shirts when I left the house in the sweltering South Florida humidity in August. Simply put, it was well hot as hell outside. I felt as if I could surpass everything, but the memory of the look in people’s eyes stuck with me for whatever reason. All I could think of was the way people looked at my mom after her first surgery. It’s not even to say it was intentional, but a look of pain and suffering. It was just sad.

The weekend before I had to head back to Tampa and return to “Real Life,” a family friend was celebrating their 50thbirthday, a party that would reunite so many familiar faces. So many people that had no idea I had undergone surgery and a handful that did. The thought of going devastated me. Of course, I wanted to see all our family friends, but what if they looked at me differently. I couldn’t bear to tell my story that many times. I remained undecided whether or not I’d attend up until the time my family was leaving the house to head to the party. Those who knew called and texted and told me I should go, that they all wanted to see me. I still wasn’t sure. Then, in true Patricia fashion, I had some sort of dramatic breakdown, cried my eyes out, washed my face, put more concealer on my scar than my under eyes have ever seen and went to the party. I took a deep breath before walking in, everyone greeted me with a “Hi” or “Oi” (in Portuguese), and not a soul looked at me differently. I grabbed a corona and took a sip, I could breathe easily now… It’s crazy the things your mind can build up if you let it. I ended up having a blast at the party and probably needed it!

Lesson to be learned, and I say this now after life has given me a bumpy road to learn from: You can’t be afraid to take chances, and you can’t expect things to always work out. But what you can do is live, live the life GOD has given you, and do it with an open heart and an open mind.

The following week, I went back to Tampa and back to work. I was nervous all over again on my first day back. I remember walking up to the door and taking a deep breath before walking in. I mean, I needed to keep it together and not have an emotional breakdown at work (or drinking corona). I hadn’t really told anyone I was going on a leave of absence, expect my boss and peers, and before leaving I told my full-timers I was getting butt implants (in true Patricia fashion that is) as a joke. So I turned the key and opened the door, and it wasn’t until I was around the corner that I ran into people from work. The stares were heavy but I smiled and said “Good morning” and continued on my way to the office. Next I saw my co-worker, who looked more nervous than I was, he hugged me and told me he had everything under control and to take it easy. I smiled and said “Thank You.” I got accustomed to the stares that day, and between the associates and the customers, I overcame another hurdle. Later that day, one of my full-timers was talking to me and said, “By the way, the butt implants look great!” I died laughing, because it was exactly what I needed. Everyone seemed to be walking on eggshells around me and I just needed some humor to cut the anxiety. It took a few weeks, but things eventually got back to normal.

I recently read “The Subtle Art of Not Giving a Fuck” by Mark Manson, and I guess you could say I jumped on the bandwagon on this one. All in all, Mark reminds us that we are the ones who choose what we give a fuck about, and it’s not something to be taken lightly. “For many of us, our proudest achievements come in the face of the greatest adversity. Our pain often makes us stronger, more resilient and more grounded.”I couldn’t agree more!

So I end this post with a moment of clarity: Sometimes things don’t work out the way we planned, but they do work to remind us that there’s still good in the world, but only if we remain open to it.