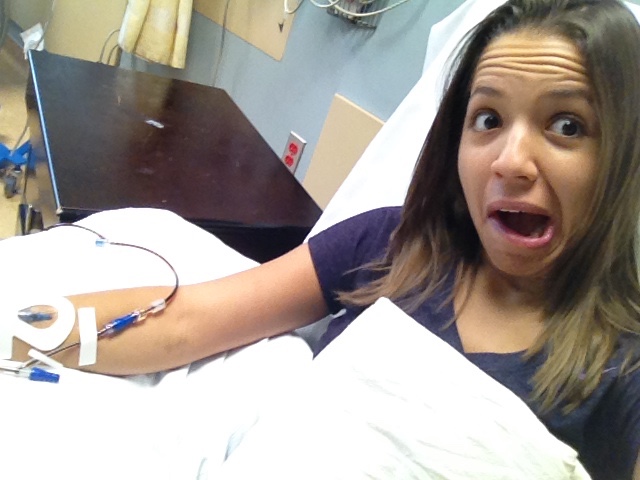 I walked into the infusion center at Tampa General Hospital; a room surrounded by large reclining chairs. The nurse led me to my seat, asked if I was comfortable and if I needed a blanket. As I looked around the room, the expressions on faces were all so different, some in pain, but all in strength. I noticed a lot of people had someone with them, but then again, I had my mom with me. The patient to my right asked if it was my first time there, I answered “yes.” So she began, “well, we all get our very own tablet, you can choose to watch TV, surf the net or play games. I have the top score on this game”, she pointed out. “There’s a curtain if you need privacy. Also, if you ever make it to the 5th floor, it’s really nice; everyone gets his or her own laptop.” I was impressed by her knowledge and enthusiasm, and thanked her. So there I was sitting in the infusion center; an infusion center is where patients go to receive chemotherapy, intravenous medications and other blood products. So what was I doing there?

Well, when we left off, I was on my way to work. Since my boss was off that day, I decided to open my email and start typing as soon as I got to work. I was informing my Store Manager and District Manager that I had papillary thyroid cancer, that I would need to take time off for surgery, but not right away because of my iron. [Back story: so you see I’ve been borderline anemic for as long as I can remember. Well, specifically since high school when I went to donate blood, and I was told my blood was “no good”. Nice, right?] I let them know that I would do great, but to please not tell anyone. Probably not the kind of information most people share in e-mail, but then again, the thought of the whole face to face thing made me kind of nervous… You see, I was okay with having cancer at that point, I just didn’t want to say it, but I was completely okay with typing it. A few hours later I checked my e-mail and my District Manager had replied saying that she knew I would do great and to eat/drink my spinach.

My next appointment was with Dr.Bimston, who happens to also have been my moms’ surgeon. He now specializes in Endocrine Surgery. He explained to me that I would be having a thyroidectomy and described where the incision would be. He pointed to my mother’s scar and explained how my scar would be even less apparent. You see, my mom had a thyroidectomy a few years before but it was due to Hashimoto’s disease. (I know, she’s super woman!) Dr.Bimston also explained more or less how I would feel after surgery, that the surgery was near my vocal chords, as well as how the thyroid replacement therapy worked. He also listed a few exams he wanted me to have done, so I could be cleared for surgery.

My next step was to find an Oncologist/ Hematologist so I could get my iron up for surgery. Which, let me tell you, is not easy when you don’t have a primary care physician and your surgeon is located 4 hours away from where you live. So I just started going through my insurance to see who took mine, reading reviews and attempting to get an appointment in the near future. Oh, and let me tell you this, because I was not prepared, every hematologist probably works for a cancer center, so be prepared for very intense recordings when you call. “Thank you for calling so and so cancer center where your life is put in the best hands… “ Like OMG, way to make someone think they’re dying. But really, I remember hanging up quickly and calling my mom like “WTF is this?” She just laughed of course, as I continued to rant, probably thinking, “Oops, did I not warn her about that?”

Next was my appointment with Dr.Patel, Oncologist/Hematologist, my mom was in town so she came with me; which she may have purposely planned, but I was grateful either way. After looking at my blood work, Dr.Patel suggested iron transfusions since it was the fastest way to get my iron up for surgery. [Side note: my iron deficiency anemia had nothing to do with the amount of spinach and/or other iron rich foods I consumed, it was an absorption issue.] The transfusions had to be done in four different sittings and a few days apart.

Next thing you know, there I was, sitting in my large recliner at the infusion center waiting for my iron transfusion. The nurse came over with her IV kit, which literally made me cringe [Back-story: I hate needles. I also have rolling veins.] I warned the nurse that I have rolling veins, because let’s be honest, I don’t want to get poked a million times. So the nurse says “Okay, let me give it a try, if I can’t get it, I’ll call the ultrasound team.” I said “Okay”. Needless to say, it was a painful attempt and she called the ultrasound team. An IV for a transfusion needs to be in a deep vein, so the ultrasound team utilizes the ultrasound machine in order to view the best vein and then place the IV versus going in blind. (Also, the ultrasound team is a small group within the hospital, so be prepared to wait up to 30 minutes for them.) Once the IV was in, the rest was smooth sailing, but then again, I would have to do this three more times. By my last transfusion I was a PRO! That is, at reminding the nurses when I checked in that I would need the ultrasound team. 😉