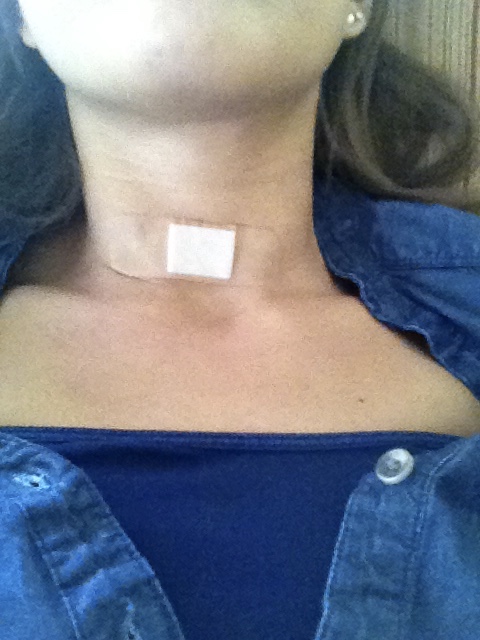 After calling my mom that day, she only said, “Well, you’re going to my Endocrinologist for the biopsy” and I simply said “Okay.” I tell you my mom must be a miracle worker, or these doctors just really love her, because she was able to get me an appointment within weeks.

I was pretty nervous on the day of the appointment, then again, I had watched various youtube videos of a fine needle going into a neck, performing a thyroid biopsy. Again, probably not the best idea. This is the day I met Dr.Harrell, a fellow University of Florida Gator, so I was bound to like him from the start. He started by doing an ultrasound of my thyroid so he could see the lymph nodes for himself. The cool part this time was that his office has the screens installed on the ceiling so the patient can see the ultrasound too! Then came the not so fun part… First, they sprayed the freeze and than a very fine needle poked through my neck to grab a piece of the lymph node for the biopsy. Dr.Harrell then placed the biopsy piece under the microscope to look at the cells. He had a medical student with him that day and as he described the cell to them, I tried so hard to remember my biology days in order to understand; but there was no point, either way the biopsy was to be sent out for results. They gave me an ice pack for my neck and helped me to get up, but for some reason the tears just started rolling down my face. My mom took me to get Jamba Juice after the appointment, Aloha Pineapple of course, my favorite . The cold was to make my neck feel better. That was probably the first time in my life that I got a treat for being a good girl at the doctor.

While driving back to Tampa the next day, I was really just trying to clear my mind of everything. I needed to be okay, no matter what the result. I was angry, which was obviously not a good idea while driving, considering I got pulled over for going 90 MPH in a 70 MPH zone. Thinking back now, the officer probably would of been more lenient with me if I wasn’t in such a I don’t give a shit mood.

A few days later Dr.Harrell called me with the results, he started by ensuring me that everything would be okay, that the biopsy had comeback positive but that I was in good hands and that I would be okay. After hanging up the phone, I was surprisingly okay, I had already taken out all my anger, I was prepared for the worst and now the worst was going to be okay.

On my way into work I called my mom and after confirming that she was not driving or operating any sort of machinery, I told her that the results came back positive. She asked if I was okay, I said yes, but can you tell Dad for me. She said, of course. Note: My parents divorced when I was 8 and both had remarried. You see my Dad is great, but I knew I wouldn’t be able to handle the sadness in his voice if I told him. I needed him to be able to call me with his normal sarcastic happy voice and sound just as positive as me, and of course a few hours later thats exactly what he did.