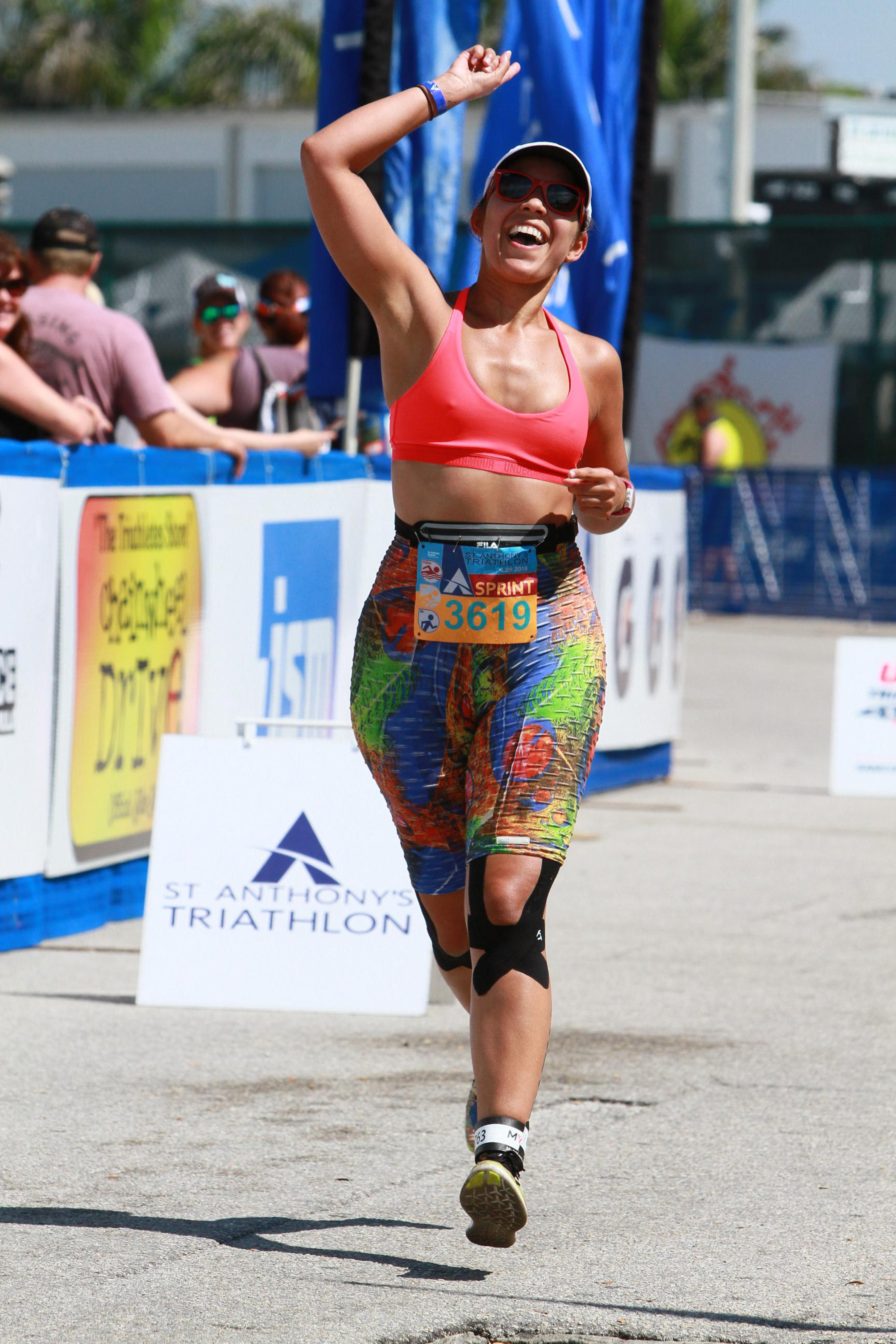 In the previous chapter, I shared my “step 2” to getting my life back. I proved to myself that with focus, determination, and, yes, lots of coffee and madeleine cookies, I could get into B- school. I was mentally back in the game, but what about physically? While I made a promise to work out at least once a week while studying, and I did, all those late-night lattes and study snacks did not leave me in the best physical shape. I had always loved exercise even before my Thyroid Cancer diagnosis; weightlifting at the gym, going for a run, cycle or yoga class. That was my jam. I wanted — no, I actually needed — to do something to prove to myself that my body was still capable of doing things. I had heard of the St. Anthony’s Sprint Triathlon a few years back and told myself that next year I’m doing it. But the next year came and I had my second surgery (right neck dissection) just two months before the race, so needless to say, I was out. January 2018 came around and it was a new year. I had proven to myself in 2017 that I could undergo a second major surgery, quit my job and start a new one, as well as study for the GMAT and apply to B-schools. I wasn’t letting anything get in my way now. This new year was going to be my year — my year to compete in the St. Anthony’s sprint triathlon. For those of you not aware, the sprint triathlon consists of swimming a half-mile in the ocean, followed by biking 12 miles and ends with a 5-kilometer run. Endurance is key! I researched training programs and how to prepare. I traded in my bookbag for a gym bag, my lattes for pre-workout shakes and my madeleine cookies for protein bars.

Most people thought I was crazy when I told them what I was doing, questioning the intention and whether or not I was a good swimmer. Clearly, the half-mile in open water really got to people. My response? I took swimming classes as a kid. I know the proper form. I know how to float and I’m training. Not to mention, there’s plenty of lifeguards around. Yet, to an extent, they were all right, the swimming was the part I was most worried about. The guidelines pointed out that if you weren’t out of the water in 30 minutes, you couldn’t continue to the next part of the race. What if I didn’t make it in time? So, I joined the Tampa aquatic club to practice in a bigger pool and time myself swimming laps. Most of the lifeguards were high schoolers, and yet, I still managed to make friends in order to get feedback on my swimming. One day, one of them said, “Someone may have told you this already, but I noticed to take a breath every three strokes, which makes perfect sense in a pool, but you may want to keep it to
an even number in the ocean, so you always take a breath facing land so a wave doesn’t get you.” It was genius!

I was training almost two hours a day, five days a week, and at least one of my (active) rest days was spent doing yoga. My lunchbox for work was looking more and more like a cooler. I needed to eat so much food to maintain this level of training. I became friends with the GNC employee in the plaza, considering I was there on a weekly — and sometimes daily — basis for one thing or another. I was feeling great.

It was the beginning of March and it was the final day to register for the race before prices went up again. I did all this training and I hadn’t even registered. In my defense, part of me wanted to make sure I could do it. And to be completely honest, part of me still wasn’t sure I could. What if I registered and then never made it out of the water? I quickly ditched that thought. I told myself I could do this and I registered. I continued to train hard, and a few days
before the race, my training came to an end. They recommend you let your body rest before the race.

The Friday before race weekend was the expo, with everything you can possibly imagine: Gear, equipment, massage therapy, info sessions for first time racers, etc. It was amazing. I picked up my registration packet, attended an info session and walked some of the course to familiarize myself. I was pumped and slightly terrified.

I talked to my parents on the phone the night before the race because I’m pretty sure they were more nervous than I was. Before heading to bed, I made sure my stuff was all laid out and ready to go. I’m not sure how much I slept with all the nerves running through me, but when the alarm went off, I was up. I got dressed and placed my temporary race tattoos on my arm and calf. It was go time. I had decided not to drink coffee that morning — just a banana and a protein shake. I ate the banana before I left the house and drank the protein shake as I drove over to St. Petersburg that morning. I parked and made my way to the event check-in, but I had to stop at the hotel hosting most of the participants to use the ladies’ room, where I puked my entire breakfast. I was so nervous. After that, I decided I should probably just stick to water. My mom called to wish me luck one last time and I told her about my breakfast.

I walked over to the race starting point, watching the Olympic racers start first, some of them had flashlights on
their heads to be able to see as the sun hadn’t risen yet. I continued to watch the racers before me begin as the sun came up. My race didn’t start until 9 a.m., yet I had to be there at 5 a.m.. As the time passed, I couldn’t decide what to do: Sit, stand; stand, sit. A little before my race I took a seat on the grass and said a prayer. I asked for strength to finish what I had started. They announced the water was cold enough to wear a wetsuit, so I put mine on, despite not having practiced in it too much. I was pitted in the “female first-timers” category for my age
group. Once I got in the water, it was a little cold, but bearable. I knew my body would warm up as I started swimming. We all swam to the starting line waiting for the race to begin. FIVE — FOUR — THREE — TWO — ONE! I started swimming, but I felt so heavy. My wetsuit was holding so much water, it made it heavier to carry myself. I swam over to one of the lifeguards on a kayak. He said, take a breath, hold on to the kayak. I told him; I need to take this off. “Can I just give it to you?” He wasn’t sure how he would get it back to me, I assured him it was OK because I couldn’t swim with it on. I unzipped the wetsuit and handed it to the lifeguard. Don’t worry, I had my sports bra and bike shorts underneath. I continued swimming and felt so much better! I could do this. I was doing fine, but I had a watch on my wrist timing me just to keep me honest. I heard one of the lifeguards yell, “Almost there, just a quarter of the way left to go!” I was motivated, but my body was tired. I looked to the right and was amazed! One of the competitors racing today was in her 70s and was swimming next to me. I remember them announcing a couple in their 70s who have raced their entire lives, and there she was right next to me, swimming backstroke. It was genius! It kept you moving yet gave you time to rest your breathing. So, I flipped onto my back and started swimming backstroke. Once I had caught my breath, I flipped back to freestyle. Next thing you know, I was out of the water in about 24 minutes. The smile on my face as I got out of the water, it was the smile of a warrior. I knew I had it, I knew I could bike and run. I had completed the hardest part of the race. I got on my bicycle and started to pedal. You can’t wear headphones during the race, so I would just hum to myself, “I got the eye of a tiger, a fighter, dancing through the fire, ‘cause I am a champion, and you’re going to hear me roar.” I finished the cycle course, but I wasn’t sure how much my legs could take. I told myself to take it one step at a time, one foot in front of the other. I saw some people start walking, but I knew if I stopped running, I wouldn’t be able to start back up again. So, I focused on maintaining a steady jog. I started to see the crowd, then the balloon arch. I
was almost there. I heard the announcer call my name: “Here comes Patricia Barboza, Patricia is this your first sprint triathlon?” I smiled, nodded and threw one arm in the air as I sprinted across the finish line. The adrenaline was incredible. I felt as if I had taken on the world.

I share this story because after thyroid cancer I had so many doubts. I thought I was just going to be stuck. After my reoccurrence, I asked myself if this was it? Was I just going to wait around for the next time this cancer decided to pop up again? That’s no way to live. Yes, reoccurrence happens, and it sucks, but if I’m going to fight, I’m going to make the best out of life. So I stopped questioning what happens if I don’t like my new job? What if I start B-school and get diagnosed again? What if my body can’t take the training? What happens if I can’t finish the race? Because at the very worst, the answer is, “Well, at least I tried.” And at the very best, the answer is limitless. This race is something I would have never thought of doing pre-cancer, so above all things, it has reminded me that I’m capable of anything I set my mind to. Cancer may have pushed pause on my life, it may have delayed my goals, but it’s not going to stop me.