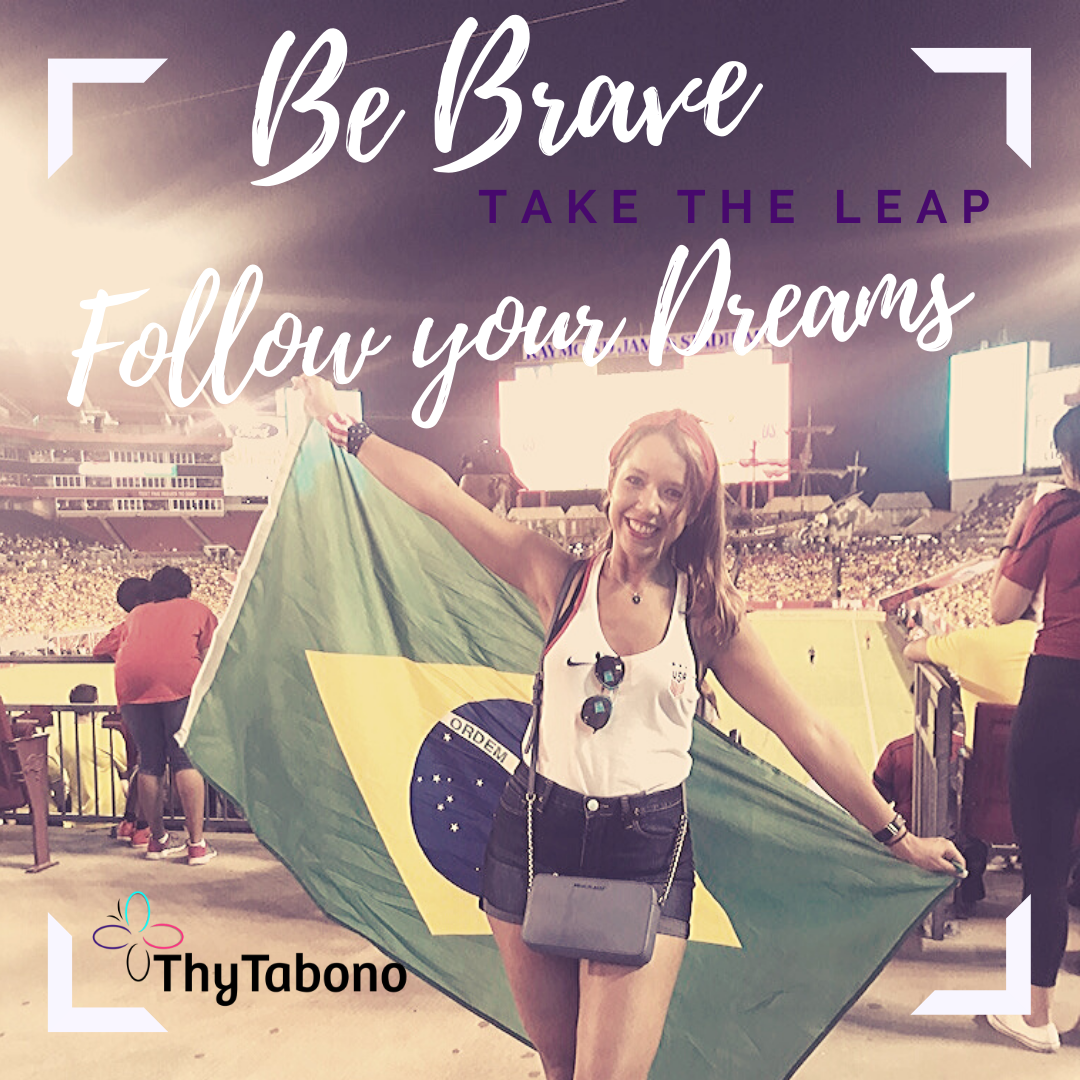 I’ll explain to you why, but first I’ll tell you a little bit about my childhood.

When I was 3 years old, my parents decided to immigrate to the United States. Having been born in Brazil, they saw the opportunity for a better life and decided to take the leap of faith. My Dad was the first to pack and leave, and just under a year later on October 14, 1990, my mom and I joined him. Some may have called it crazy, a 22- and 24-year-old moving to another country with a 3-year-old. My parents are by far the most courageous and hardworking people I know, having worked multiple jobs to ensure I always had everything I needed growing up. From a very young age, my parents always instilled in me the importance of a good education and work ethic. In high school, I took part in the International Baccalaureate magnet program. I studied hard not knowing what the future would bring. Naïve, for lack of better terms, but GOD IS GOOD, and in my junior year of high school, I became a legal resident. And by my senior year, all the hard work paid off when I received my acceptance along with a full ride to the University of Florida.

In the years that had passed, my parents had separated and remarried, giving me a younger sister and brother. So I knew what my goal needed to be the day I walked across the stage of my college graduation. I wasn’t a little girl anymore, my parents had their hands full taking care of my siblings. I needed to be ready for the real world and become financially independent. My parents had given me the American dream. It was now up to me to do my part. A graduate school acceptance or job offer would be in my hand the day I crossed that stage. And so, in December of 2010, I graduated with my bachelor’s degree in one hand and an accepted job offer in the other.

Fast forward six years later, and the thought of quitting my job was as terrifying as you could imagine. It’s not like I wasn’t going to have another job at all. I had another offer. It’s just that I worked for the same company for six years and took a LOA for my thyroidectomy, radiation and right neck discretion, and had always returned to an extremely supportive team. Even more, quitting my job meant going at least a month without health insurance until my new insurance kicked in. What if something happened and I needed to see a doctor? I wasn’t exactly “low-risk.” Did this mean I was stuck, never able to leave, and forced to work at a job where I was no longer engaged because of my health?

(Let me expand on this for a moment for those of you who are not familiar with this conundrum. Employee-provided health insurance is amazing, and I would be hesitant to work somewhere without it. On average Synthroid runs about $35 for a 30-day supply, the generic Levothyroxine for $15. We are talking 50 cents to a dollar a day for the rest of your life — with insurance. Currently, the ACA makes it illegal to deny coverage or charge a premium for having a predisposition, in this case a history of cancer. Yet, insurance premiums exist based on your history of prescription drugs, such as Synthroid.)

What if I quit and ended up hating the new job? Billions of questions kept rolling through my mind. I needed to get it together. I negotiated salary, vacation time and other benefits. I was obviously ready to make the change. Why couldn’t I just jump? I spoke to a few close friends, but ultimately the decision was mine. I called my mom balling my eyes out, and she calmed me down a bit and had me recite my lists of pros and cons for each job, then think about what I really wanted. She reminded me that everything would be OK (although, I’m not really sure how confident she felt in that, more like she prayed everything would be OK.) I knew deep inside that I just wasn’t happy at my current job, and that there were so many things I couldn’t get done because my work schedule got in the way. After hanging up with my mom, I called the recruiter and accepted the job. (I obviously needed to do it before my overanalyzing brain convinced me not to.) It was such a rush. After I hung up the phone, I felt an ease come over me. I picked up the phone and called my Dad. I told him how I had received a job offer for the position I had interviewed for, and that I had accepted it. Shocked that I had already made such a big decision, he asked: “Do they give you health insurance?”  (Obviously, a chief concern for a two-time cancer survivor). They did and shared how excited I was about my new opportunity. After hanging up the phone, it hit me: “Oh, shit … I need to leave my current job.” I was obviously going to be professional and give my two-week notice, but the thought of leaving somewhere I had been for six years made me cringe. I called my old co-worker-turned-best friend who had left the company the previous year for some advice. She helped me type my resignation letter at my house, then drove to Kinkos to print it. Just holding the paper in my hand made me nervous. She suggested a celebratory beer, so we stopped at Irish 31 on the way home. We grabbed a table outside because the weather was so nice. I can’t quite remember what I ordered to drink. It might’ve been a Corona, but most likely it was something on tap. What I do remember is feeling at ease, proud of myself for being brave and confident that I had made the right decision. It was exactly what I needed.

I went to work the next day, and after my boss got settled in, I asked to speak with her. I placed the letter in the middle of my agenda and walked into her office and took a seat. When she smiled and asked what I wanted to discuss, I took a deep breath and explained that I needed to give my notice and my eyes filled with tears. In a state of shock, she wanted to know why I was leaving, and if it had anything to do with my position or something she had done. I thanked her for everything she had done for me, explained how hard it was to leave a company that had been there for me through so much, but that it was a great opportunity, and I didn’t want to pass it up. She nodded. She asked me not to share the news with anyone until she informed her boss. After lunch, she called me into her office and explained that I would not be able to stay for my final weeks because I was going to a competitor. Rest assured, the company still paid me out for those two weeks. As I packed my things and walked out of the building for the last time, I felt a huge weight lifted off my shoulders. Then I thought to myself, what would I do for the next two weeks? I decided I would go on vacation! I mean, I had just accepted a job that offered less paid vacation than what I had (I know, some would call me crazy…) so I had to take advantage. I got home and searched Skyscanner until I found a deal. Bam! I booked a $300 round trip to San Francisco. It was set to be a solo trip, until I called my mom to share the news and she decided to join. Mother-Daughter trip it is! We had a great time!

It wasn’t until I got back that I realized I was low on Synthroid, and that the last day of coverage under my old insurance had passed. That you can only apply for Cobra approximately two  weeks after leaving your job. By the time I could apply and get the approval, I would probably be receiving insurance from my new employer (30 days). (Cobra, Consolidated Omnibus Budget Reconciliation Act, lets you temporarily keep the same employer-based health plan you had at your previous job, to avoid a gap in healthcare) I didn’t plan that too well. How did I get myself into this shit? I didn’t even want to know how much Synthroid would cost without insurance. Shit was definitely hitting the fan. Luckily, my mom also takes Synthroid (not the same dose, but close) since she had her thyroid removed due to Hashimoto’s disease, and had some extra to mail me. I figured two weeks wasn’t going to kill me. (Disclaimer: I would not suggest taking a Synthroid dosage that is not intended for you.) Word of Advice: If you decide to quit your job, first refill all your prescriptions! #LifeLessons

On July 5th, 2017 I started my new career. The change in work-life balance was incredible. I had so much free time I would randomly call my family on lunch or my drive home. It wasn’t until those conversations that it dawned on them how much happier I was. Living four hours away made it hard for them to notice how stressed and unhappy I was previously. The change was definitely for the good, they knew it as much as I did!

I always thought the lesson my parents intended for me to learn growing up was to work hard and build a future, and yet they also taught me to be brave, take the leap and follow my dreams!