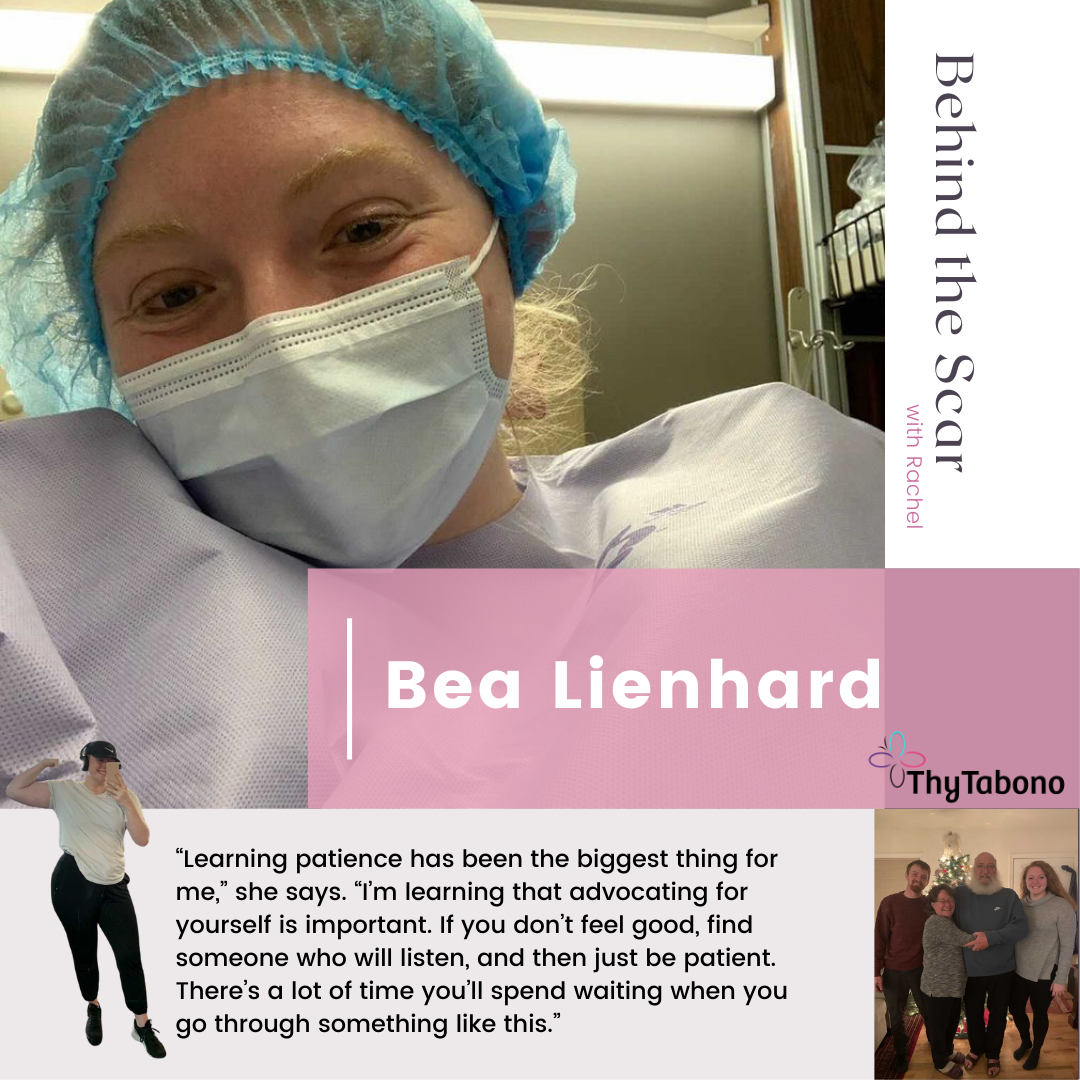 Behind the Scar with Rachel

West Virginia native Bea Lienhard was shocked when she was told she had thyroid cancer. The otherwise healthy 26-year-old never had any signs or symptoms of cancer, and only found out about her cancer because after going to see her doctor for a routine checkup in November 2020.

When her doctor felt her neck at that appointment, there was a lump.

“My doctor sent me to get an ultrasound immediately,” she says. “From the ultrasound, they saw something suspicious. I had a large lump on the right side of my thyroid and a smaller lump on the left side. From there, they told me to go get a biopsy.”

The same day she had her biopsy in January 2021, Bea’s doctor called her to tell her that she did indeed have cancer.

“I was in shock because I wasn’t expecting that call,” she says. “I didn’t even hear what kind of cancer she told me I had until I saw her a week later. I learned I had papillary thyroid cancer.”

Bea’s surgery was fast tracked, and she had a total thyroidectomy on Feb. 9, 2021. Everything with recovery went well, she says, and fortunately she was told she does not need to have radioactive iodine treatment (RAI).

“I haven’t been put into the category where I need RAI,” she says. “My tumor marker level is low, and I didn’t have an extensive number of lymph nodes removed during the surgery. The biggest struggle now is working with my endocrinologist to get my medications right.”

A lack of energy and dealing with doctors who don’t listen to her concerns have been other struggles she’s faced in the last several months as she’s adjusted to life without a thyroid.

“I feel alright other than being tired and fatigued, and that’s just where I’m at right now,” she said. “My doctor is constantly checking those tumor markers because the minute they go up is when I’ll have to do RAI.”

As Bea works through the side effects of her medication and trying to find the right dosage, she is also working at keeping herself healthy, but even that has its challenges.

“I’m trying to lose weight, but every time I lose some weight it throws off my meds all over again,” she says. “It’s like starting from the beginning every time my meds change.”

That frustration, coupled with having to be her own healthcare advocate much of the time, has been the most strenuous part of her journey, Bea says.

“It’s very frustrating how much you have to do advocate for yourself, because I’ve never had to do this before,” she says. “Honestly, the most frustrating part, aside from how I feel, is having to justify how I feel to this person who is prescribing my medication.”

Even though it has been frustrating having to advocate so strongly for her health, Bea realizes its in that struggle that she has learned it’s good to stand up for yourself—and to have a lot of patience.

“Learning patience has been the biggest thing for me,” she says. “I’m learning that advocating for yourself is important. If you don’t feel good, find someone who will listen, and then just be patient. There’s a lot of time you’ll spend waiting when you go through something like this.”

Bea says she’s also learning to give herself rest days when she’s not feeling up to accomplishing a lot.

“I honor that now,” she says. “I never really did before; I always pushed to the limit. I dislike the fatigue, because I feel like there’s never a day where I wake up and feel 100 percent, but I am trying to honor that.”

Bea adds that she thinks a lot about the person she was before her cancer diagnosis and has realized she needs to let that person go.

“I think about that person a lot, and it makes me upset or sad some days because I can’t be that person anymore,” she says. “I felt great before [my diagnosis] and like nothing was wrong. I never noticed any symptoms.”

With no evidence of cancer is her family history, the diagnosis was shocking. And even though she’s arguably a different person now, Bea hasn’t let that stop her from going for her goals. She loves weightlifting and has slowly gotten back into going to the gym as she’s healed from her surgery and worked on her medication adjustments. She admits that some days the energy just isn’t there but getting back into something she loves has made all the difference. Besides weightlifting, Bea enjoys spending time with her family and friends, her two cats and being out in nature.

Looking into the future, Bea says she and her doctor will be watching and waiting to make sure her tumor markers stay low, as she keeps up on her routine lab work and ultrasounds.

“I’m still not even a year past my diagnosis, so we will just keep watching and waiting,” she says.

Thank you Bea for sharing your journey with us & reminding us all to have patience.